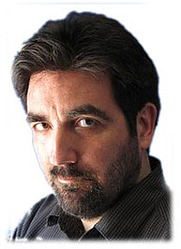 David Nickle lives and works in Toronto, where he covers municipal matters for the Toronto Community News group of newspapers. His fiction has beenpublished in magazines, anthologies and online, and been adapted for television. In 1997, he and Edo Van Belkom won a Bram Stoker Award for their short story “Rat Food.” In 1993, he and Karl Schroeder co-wrote “The Toy Mill” and won an Aurora Award for short form work in English. In 1997, they published The Claus Effect, an expansion on that story. It’s available from EDGE Science Fiction and Fantasy Publishing. Some of his stories are collected in Monstrous Affections, published in 2009 by ChiZine Publications. In 2010, Monstrous Affections was awarded the Black Quill Reader’s Choice Award for best dark genre collection. His novel Eutopia: A Novel of Terrible Optimism, was released by ChiZine Publications in the spring of 2011.